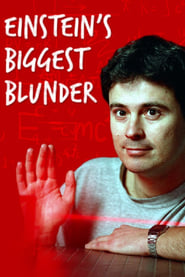 Science Documentary hosted by Mathew Zajac and published by Channel 4 broadcasted as part of CH4 Equinox series in 2000 – English narration At the dawn of a new century, a new theory is being born. It threatens to demolish the foundations of 20th century physics. Its authors are two of the world’s leading cosmologists. If they’re right, Einstein was wrong. It all began when Andy Albrecht and Joao Magueijo met at a conference in America in 1996. This program began from Newtonian view of the universe then takes you through the General Relativity and the Flatness problem. This leads to the Horizon problem and its solution, the Inflation theory. However modern astronomy doesn’t stop here, the Inflation theory has its flaw too, and what happened before the big bang? This can all be answered by changing one thing, the one thing no body dare to question until now.
Original title Einstein's Biggest Blunder
TMDb Rating 7.3 3 votes

Andy Albrecht
Himself - University of California

John Baldwin
Himself - University of Cambridge

Ruth Durrer
Herself - University of Geneva

Richard Ellis
Himself - University of Cambridge

Dave Wark
Himself - University of Sussex