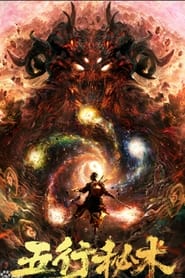 The ancient people created the five secret arts based on the principle of the five elements, which are the five arts of gold, wood, water, fire and earth, and formed five corresponding sects. However, with the decline of the Golden Gate, the whereabouts of this secret treasure are not known. The Golden Gate heir, Yang Lao, with his son, Yang Yiqin, lives in anonymity in Taoyuan Town, playing iron and selling vegetables.
Original title 五行秘术